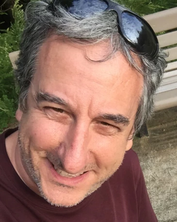 Keyboardist/Composer Michael Pelz-Sherman, PhD has been performing professionally on piano, organ, synthesizers and percussion since the age of 16. Since winning first place at the Eau Claire, Wisconsin Jazz Quartet competition in 1980, he has continued to refine his voice, absorbing influences from a wide range of styles and cultures. A graduate of Indiana University and UC San Diego music programs, Michael studied composition with Earl Browne, Donald Erb, Harvey Sollberger, Rand Steiger, Roger Reynolds, and Brian Ferneyhough. While a student at IU, he was awarded 2nd prize in the SCI composition competition for his piece "Earth, Wind, and Wire" for clarinet, percussion, and 2 harps. He played keyboards and wrote music for the Minneapolis Jazz fusion group "Little Green Men", whose album "Jazz From Mars" won "Best Jazz Recording" at the 1989 Minnesota Music Awards. He also toured the Soviet Union that same year as part of the group "Rockhouse", backing up vocalist Prudence Johnson.

An accomplished software engineer and computer-musician, Michael served as a Musical Assistant at IRCAM in Paris, France in 1992, where he created an original real-time computer-assisted performance system and designed sounds for Netherlands composer Klass Torstensson's Urban Songs. His compositions have been commissioned and performed at the Crested Butte Music Festival, and he is an active member of the International Society of Improvised Music.

Michael's formal musical training, combined with many years of professional experience playing rock and jazz clubs throughout the country, provides him with a huge expressive palette and an endless wellspring of musical ideas. His Ph.D. dissertation, "A Framework for the Analysis of Performer Interactions in Improvised Music", created under the guidance of trombonist/impoviser/author George E. Lewis, demonstrates his deep love for and understanding of the history, development, and structure of creative improvised music that has risen out of American Jazz.
​
Michael currently resides in Cary, North Carolina (USA) where he teaches piano and performs regularly with his jazz trio MPS Trio, the North Carolina Jazz Ensemble, acoustic soul duo The Lounge Doctors, and many other groups as a freelance keyboardist. In Sept. 2012, he released an album of original music with his progressive jazz group, The MPS Project. He will be releasing an album of jazz standards in Spring.
​
Reserve ticket